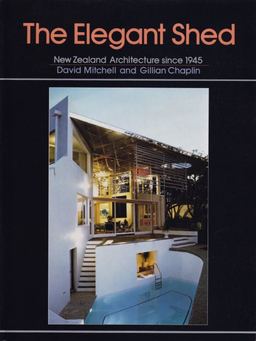 The Dorset Street Flats cited as the model for later town-house development throughout the country.

Warren and Mahoney were to become the best known, and arguably the most popular, architects of the 1960s and 70s. Yet their most influential building was one of their first; the little single-person flats set in a row in Dorset Street, Christchurch, in 1959 gave substance to a vision of the town-house that was to capture the imagination of New Zealand architects and clients alike.
The underlying model for these flats was the English terrace house, but because the flats were very small, one was placed above the another so that each pair overlooked a courtyard. Stairs between groups of flats gave access to those on the upper level. The architects here declined to use a continuous balcony to give access to the upper flats, and thereby avoided the squalid connotations of the “sausage flats” that were being built at the time in city suburbs elsewhere. Warren and Mahoney have often used this method of access to the upper floors of all sorts of buildings, avoiding corridors and continuous balconies at all costs. The technique can be seen in Christchurch College, at the University Student Union building in Auckland, and at Christ’s College.

At Dorset Street the architects were blessed with a site that was shallow and wide, ideally suited to a row-house development, but it was not until 1963 that they got the chance to show what could be done on a large deep site with a relatively narrow frontage. These “flats”, as they were still called, were built for Mrs Broderick in Merivale, and these were truly what we now know as town-houses. At that time many commentators were still asserting that New Zealanders would not live in flats, but within a few years planning ordinances around the country were adjusted to allow the kinds of buildings that Warren and Mahoney had demonstrated could be pleasant, private and popular.