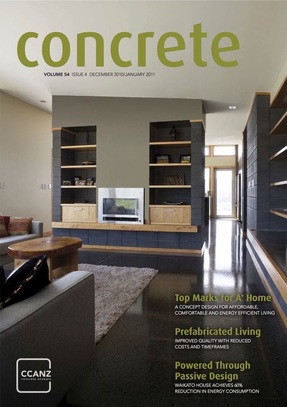 It was not until the third phase of modernism, characterised by professional confidence and a search for local identity, that modernity could be linked to the New Zealand condition. The 1950s were witness to discourse around architectural expression appropriate to New Zealand conditions; specific to the cultural and social characteristics, the environmental conditions and constructed of local materials. Alongside timber, concrete remained a preferred material.
The main formats for use were the concrete masonry unit and off the form cast in situ concrete. While precast concrete was beginning to be developed by the early 1960s, applications were focussed on commercial structures, where the scale of repetition made its use feasible. At the domestic scale, as with the work carried out by the European influenced designers, concrete work was mainly cast in place. Architects experimented with concrete surface textures and combinations of materials to enrich their designs. In an international context, this form of expression was akin to Scandinavian practices. The link to northern European is quite clear and has been acknowledged by architects such as Sir Miles Warren.
Warren is the most significant architect working during this period. His South Island roots have had a strong influence on his architectural style, particularly during the seminal period when modern architecture became regionally distinct. He first made a mark with the Dorset Street Flats, eight modest dwellings grouped into two walk up forms. The structural system consists of concrete masonry walls, a cast in situ concrete floor system and lightweight roof. Here Warren foreshadows the language of detailing that would punctuate his career and influence so many others. Every junction, every opportunity is used to express the nature of the materials and method /process of building. The concrete floor and beam support structure are left unfinished, set off from the concrete masonry walls that are painted white to derive maximum effect from the intense New Zealand light. The combination of concrete ‘brut’ and painted concrete masonry became the hallmark of the work of Warren & Mahoney for some 25 years. Concrete masonry offered opportunity to imbue wall surfaces with scale and texture while accommodating the structural requirements for this seismically active area. The 20cm x20cm x 40cm module of the concrete block influenced virtually every dimension and detail, horizontal and vertical.

The Grigg House saw the introduction of the steeply pitched roof, inspired by the houses Warren visited in Denmark. The taller forms were appropriate to the social and geographic conditions of Canterbury, where he worked. The class and social structure of Canterbury is well developed, recalling its strong links to England. The affluent clients were drawn to the more substantial appearance created by these roof forms. These forms also seem appropriate to punctuate the building against the broad, relentless plains of the region.
The undisputed highlight of concrete residential scale buildings realised during this period is the townhouse completed for the architect himself in 1965. Built at 65 Cambridge Terrace in Christchurch, the four storey building is a visual concert in board formed natural finished concrete, painted concrete masonry, native timber (painted externally) and large areas of glass. A three storey mass seemingly floats above a concrete floor structure cantilevered out from the hidden concrete masonry walls. The relationship between vertical supports, cantilevered structure and the glazing suggests that the mass above is carried by the glass. But Warren is also generous, revealing for all to see the structural solution as part of the architecture. Nothing is covered over; this is truly a rational but at the same time expressive building.

The architect developed the detailing approach evident in the work that precedes it, particularly in the Dorset Street Flats. However, the details are even more exaggerated, and at the same time, refined. The larger-than-life forms, structural sensibility and detailing manner that celebrate each and every coming together can also be traced to the commercial work carried out by the practice, particularly the competition winning entry for the Christchurch Town Hall. According to Warren, construction had to be dry and preferably prefabricated [although neither was a particular feature of the project at 65 Cambridge Terrace], each material exposed and each separate part articulated. The materials should be used au natural, and a whole new system of bringing parts together was devised based on junctions without architraves and recessed detailing. This building and many others like it synthesised the maturing of architectural practice in New Zealand. Finally, more than 100 years after colonial settlement, architects had developed an architectural language unique to this place.

Reproduced with the permission of the publisher.  For the full text of the article, click below.
Read Full Version