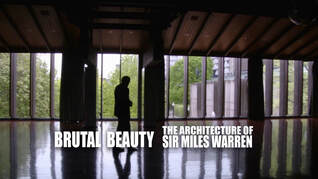 “Brutal Beauty” was a commissioned one-hour documentary film screened as part of Television New Zealand's "Artsville" series in 2011, and traces the storied career of architect Sir Miles Warren, and his impact on the country's urban landscape. Importantly, the film was shot in 2010, prior to the devastating February 22nd 2011 Canterbury earthquake, meaning buildings are viewed and analysed through a lens of innocence of the devastation soon to come.

The documentary features Sir Miles revisiting and reminiscing on a number of his most important milestone buildings, including a stop at Dorset Street Flats, as shown in the clip here. Contextual information is provided by architecture and design historian Douglas Lloyd Jenkins, author of “At Home: A Century of New Zealand Design” (2004).

Click below to view a longer excerpt at NZOnScreen.
Watch Excerpt