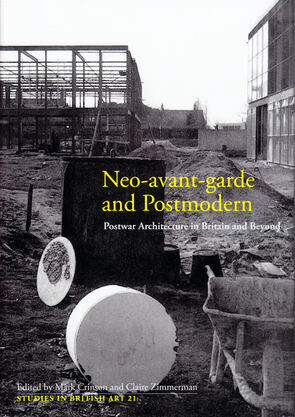 Excerpt from an essay on Miles Warren's early career and influences of New English Brutalism.

Warren sailed for Southampton in 1953. Like many young Australasian architects, he felt the need to spend time in a more metropolitan context than was available at home. During the (northern) summer of that year he travelled to Paris and Scandinavia. Returning to London, he was employed by the London County Council (LCC) and joint the architectural team working on the Alton West public-housing estate at Roehampton Lane…, led by William Howell, John Killick, John Partridge and Stan Amis. Warren worked with Amis on the twelve-storey tower blocks, trying to apply the team’s modified version of Le Corbusier’s Modulor to the detailed layout of the flats. Leisure time was also taken up with architecture: exploring London for prewar modern buildings and new ones under way; conversations about architecture; attending discussions about the public-housing schemes then so important in British architectural discourse and production; and hearing emerging architectural talents like James Stirling talk. Particularly important was a trip to Hunstanton in 1954, when it had just been completed. In “Style in New Zealand Architecture”, Warren describes his immersion in this lively British scene with palpable excitement:

I was in London at the LCC, extraordinarily fortunate to be sitting right in the middle of the birth of Brutalism. I went over the Hunstanton School with the Smithsons and Ove Arup - that is the Miesian steel and brick building, suffering now badly from the salt spray of the Wash. I went to the great debate at the AA about the Leeds housing competition, lapped up the Corbusian influence of the LCC led by Bill Howell, Killick, Amis, Partridge etc. and like so many architects, came home brimful of ideas and determined to force them on an unsuspecting public.

But it is hard to know in detail what the ideas were that Warren returned with to New Zealand. While the 1960s and 1970s saw many buildings by Warren and others realised there that have loosely been termed Brutalist, there is a lag between these and Warren’s English experience. He did not come home with Brutalism as a fully worked-out architectural strategy. What Warren has particularly identified from his London period as influential subsequently is the understanding he gained of the masonry wall. He recalls:

Like most young New Zealand architects coming to Europe for the first time, I discovered a sense of the solidity of masonry walls - their weight, their load-bearing capacity, their sense of enclosure, all in marked contrast to our thin 4 x 2 inch (100 x 50mm) partition walls. This was reinforced by the blocks of flats designed by Howell, Killick and Partridge for the London City Council, with load-bearing brick walls, and the six terrace houses being built for then at South Hill Park in Hampstead [actually by Howell and Amis]. I later introduced the load-bearing solid wall into a block of flats in Christchurch’s Dorset Street - not in machine brick but reinforced concrete block.