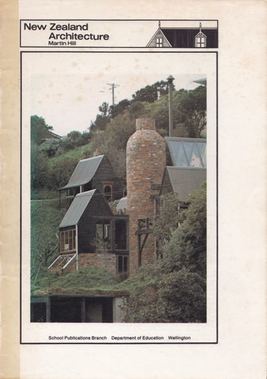 Dorset Street Flats in New Zealand school textbook. The text was first published in a series of articles in "Education" magazine in 1975.

However, mainly in Christchurch, there began the idea of town houses, which solved many city living problems and brought new design standards.

Inspired largely by the buildings of English speculators and British council housing, architects such as Warren and Mahoney and P.J. Beaven headed a resurgence of design. They used large windows, dutch doors, balconies, and sheltered courtyard gardens to set the pattern. Concrete blocks were the main construction material and were contrasted with natural finished timbers. Steep pitched roofs and open ceilings followed the early colonial houses while low eaves gave a human scale. The social attraction of a small private garden with a small flat, near the centre of the city, had great appeal and the style took on throughout the country.

Flats in Dorset Street, Christchurch, by Warren and Mahoney, with courtyard gardens for privacy at the street frontage. Concrete blockwork is the main wall material, and gable roof and balcony timbers have a natural finish.