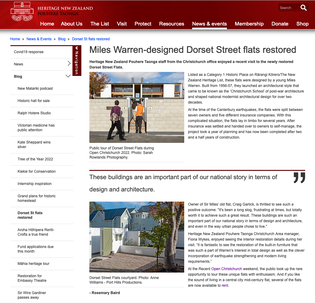 Listed as a Category 1 Historic Place on Rārangi Kōrero/The New Zealand Heritage List, these flats were designed by a young Miles Warren. Built from 1956-57, they launched an architectural style that came to be known as the ‘Christchurch School’ of post-war architecture and shaped national modernist architectural design for over two decades.

At the time of the Canterbury earthquakes, the flats were split between seven owners and five different insurance companies. With this complicated situation, the flats lay in limbo for several years. After insurance was settled and handed over to owners to self-manage, the project took a year of planning and has now been completed after two and a half years of construction.

Owner of Sir Miles’ old flat, Craig Garlick, is thrilled to see such a positive outcome: "It's been a long slog, frustrating at times, but totally worth it to achieve such a great result. These buildings are such an important part of our national story in terms of design and architecture, and even in the way urban people chose to live.”

Heritage New Zealand Pouhere Taonga Christchurch Area manager, Fiona Wykes, enjoyed seeing the interior restoration details during her visit. “It is fantastic to see the restoration of the built-in furniture that was such a part of Warren’s interest in total design as well as the clever incorporation of earthquake strengthening and modern living requirements.”

At the Recent Open Christchurch weekend, the public took up the rare opportunity to tour these unique flats with enthusiasm. And if you like the sound of living in a central city mid-century flat, several of the flats are now available to rent. 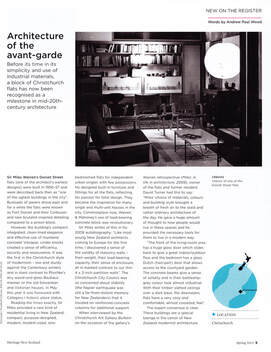 The magazine of the New Zealand Historic Places Trust marks the awarding of Category 1 status for the Dorset Street Flats in May 2010.

Architecture of the Avant-Garde

Before its time in its simplicity and use of industrial materials, a block of Christchurch flats has now been recognised as a milestone in mid-20th-century architecture.

Sir Miles Warren’s Dorset Street flats (one of the architect’s earliest designs) were built in 1956-57 and were described back then as “one of the ugliest buildings in the city”. Busloads of jeerers drove past and for a while the flats were known as Fort Dorset and their Corbusier and new brutalist-inspired detailing compared to a prison block.

However, the building’s compact, integrated, clean-lined elegance and effective use of mundane concrete Vibrapac cinder blocks created a sense of efficiency, security and reassurance. It was the first in the Christchurch style of modernism - low and sturdy against the Canterbury winters and in stark contrast to Plischke’s airy wood-and-glass Bauhaus manner or the old Edwardian and Victorian houses. In May this year it was honoured with Category 1 historic places status.

Reading the times exactly, Sir Miles provided a new kind of residential living in New Zealand: compact, purpose-designed, modern, modest-sized, one-bedroomed flats for independent urban singles with few possessions. He designed built-in furniture and fittings for all the flats, reflecting his passion for total design. They became the inspiration for many single and multi-unit houses in the city. Commonplace now, Warren & Mahoney’s use of load-bearing concrete block was revolutionary.

Sir Miles writes of this in his 2008 autobiography: “Like most young New Zealand architects coming to Europe for the first time, I discovered a sense of the solidity of masonry walls - their weight, their load-bearing capacity, their sense of enclosure, all in marked contrast to our thin 4 x 2-inch partition walls”. The Christchurch City Council was so concerned about stability (the Napier earthquake was still a far-from-distant memory for New Zealanders) that it insisted on reinforced-concrete columns for additional support.

When interviewed by the Christchurch Art Gallery Bulletin on the occasion of the gallery’s Warren retrospective (Miles: A life in architecture, 2009), owner of the flats and former resident David Turner had this to say: “Miles’ choice of materials, colours and building-style brought a breath of fresh air to the staid and rather ordinary architecture of the day. He gave a huge amount of thought to how people would live in these spaces and he provided the necessary tools for them to live in a modern way.

“The front of the living-room area has a huge glass door which slides back to give a great indoor/outdoor flow and the bedroom has a glass Dutch (two-part) door that allows access to the courtyard garden. The concrete beams give a sense of solidity and in their battleship-grey colour look almost industrial. With their timber slatted ceilings over a dark base, the downstairs flats have a very cosy and comfortable, almost cosseted, feel”.

The expert consensus is clear. These buildings are a special taonga in the canon of New Zealand modernist architecture.