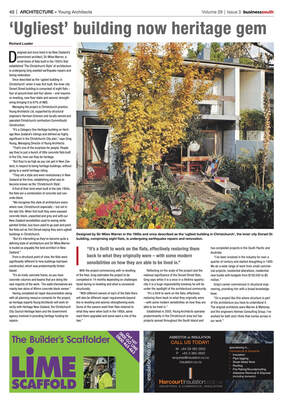 Profile on Greg Young of Young Architects, project manager overseeing the rebuild and restoration of the Dorset Street Flats.

Designed and once lived in by New Zealand’s preeminent architect, Sir Miles Warren, a small block of flats built in the 1950’s that established ‘The Christchurch Style’ of architecture is undergoing long awaited earthquake repairs and loving restoration.

Once described as the ‘ugliest building in Christchurch’ when it was first built, the inner city Dorset Street building is comprised of eight flats – four at ground level and four above – and requires re-levelling, new floor slabs and seismic strengthening bringing it to 67% of NBS.

“That’s one of the surprises for people. People say they’re just a bunch of little concrete flats built in the 50s, how can they be heritage.

“But they’re as high as you can get in New Zealand, in respect to being heritage buildings, without going to a world heritage rating.

“They set a style and were revolutionary in New Zealand at the time, establishing what was to become known as the ‘Christchurch Style’."

A first of their kind when built in the late 1950s, the flats are a combination of concrete and concrete block.

“We recognise this style of architecture everywhere now; Christchurch especially – but not in the late 50s. When first built they were exposed concrete block, unpainted and grey and with our New Zealand sensibilities used to seeing white painted timber, bus tours used to go past and point the flats out as Fort Dorset saying they were ugliest buildings in Christchurch.
“But it’s interesting as they’ve become quite a defining style of architecture and Sir Miles Warren is touted as arguably the best architect in New Zealand.”

From a structural point of view, the flats were significantly different to how buildings had been constructed, which was predominantly timber based.

“It’s an insitu concrete frame, so you have concrete columns and beams that are doing the vast majority of the work. The walls themselves are mainly two skins of 90mm concrete block veneer.”

Having completed all repair documentation along with all planning resource consents for the project, as heritage experts Young Architects will work directly with Heritage New Zealand, the Christchurch City Council Heritage team and the Government agency involved in providing heritage funding for repairs.

With the project commencing with re-levelling of the floor, Greg estimates the project to be completed in 14 months depending on challenges faced during re-levelling and what is uncovered structurally.

“With different owners of each of the flats there will also be different repair requirements beyond the re-levelling and seismic strengthening work. Some of the owners want their flats restored to what they were when built in the 1950s, some want them upgraded and some want a mix of the two.”

Reflecting on the scale of the project and the national significance of the Dorset Street flats, Greg says while it is a once in a lifetime opportunity it is a huge responsibility knowing he will be under the spotlight of the architectural community.

“It’s a thrill to work on the flats, effectively restoring them back to what they originally were – with some modern sensibilities on how they are able to be lived in.”

Established in 2003, Young Architects operates predominantly in the Christchurch area but has projects spread throughout the South Island and has completed projects in the South Pacific and Australia.

“I’ve been involved in the industry for over a quarter of century and started draughting in 1993. We do a wide range of work from small commercial projects, residential alterations, residential new builds with budgets from $100,000 to $5 million.”

Greg’s career commenced in structural engineering, providing him with a broad knowledge base.

“On a project like this where structure is part of the architecture you have to understand it. The original architects were Warren & Mahoney and the engineers Holmes Consulting Group. I’ve worked for both and I think that comes across in our work.”

Designed by Sir Miles Warren in the 1950s and once described as the ‘ugliest building in Christchurch’, the inner city Dorset St building, comprising eight flats, is undergoing earthquake repairs and renovation.

Young Architects is working directly with Heritage New Zealand and the CCC heritage team repairing the Category One Heritage building on Dorset St.