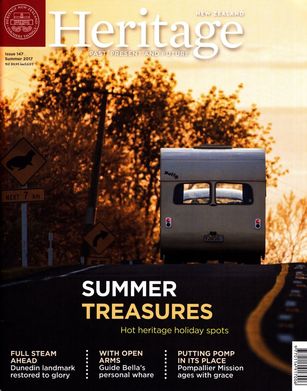 The magazine of Heritage New Zealand marks the awarding of Category 1 status for College House, University of Canterbury.

With rooms that trap the sunlight and communal spaces that foster friendships, College House has been lightening the days of study for its residents for decades.

You can see the twinkle in architect Sir Miles Warren’s eyes as he recalls being given the brief to design a new residence at the University of Canterbury for the young men of College House. “’A residential college for 120 men. You’re supposed to know what you’re doing, Warren,’ said Bursar Donald Dobson. ‘Get on with it.’ That was it. You wouldn’t get that now,” he laughs.

Extra buildings were needed urgently for the overcrowded College House campus that was spilling out of its Rolleston Avenue site. In 1957, after College House became fully independent of Christ’s College, it started planning to follow the University of Canterbury from the centre of Christchurch to its current site in Ilam. The College House Board took a chance on Miles and his partner Maurice Mahoney, who despite both being in their early 30s, had already developed an exciting portfolio of projects.

The 116-year-old College House breathed in new life as it opened the residence on Waimairi Road in 1966. Among the first students to shift in was Sam Neill, then studying English literature and enjoying his first exposure to acting. “Timeless” is how he describes the complex. “One of Sir Miles’s best.”

He’s not the only one who thinks so. Fifty years on, the buildings that make up the complex have been listed as a Category 1 historic place. Heritage New Zealand Area Manager Canterbury/West Coast Christine Whybrew says they are among the most important educational accommodation buildings constructed in New Zealand in the 20th century.

“They truly represent modernist architecture where the interiors are often quite different from the exteriors. The street frontage of College House, and even the chapel, are quite austere but once you move inside, the spaces are inspirational.
“The outside is concrete blocks and fair-faced concrete, and then you walk inside and there are wonderful timber lattice structures that embrace the light.
“It’s always a wonderful surprise to walk into one of these buildings,” she says.

Eschewing the traditional university halls of long corridors and lots of rooms, Warren and Mahoney embraced the Oxford-Cambridge model for their design. They created sets of rooms built in houses around a grassed quadrangle. While the design was a nod to the College House founders of 1850, who sought to emulate the structure and style of the Oxbridge colleges, for Warren and Mahoney the buildings has a specific function. They were for living in, for studying, for communal living and building friendships – form had to follow function.

There were originally eight blocks or houses of three storeys with five bedrooms on each level. Three more houses have since been added to the complex. All the bedrooms face north – a specific requirement of Sir Miles, who never forgot his own cold student digs at the University of Auckland.

The bathrooms draw further on Sir Miles’s university experience, where student high jinks often resulted in flooded baths and water ruining rooms and creating damage that students had to pay for. While still attached to each set of rooms, the bathrooms were designed as separate tower blocks with a water tank mounted on each tower. Sir Miles was delighted to lean that these facilities were once praised by the Journal of the Royal Institute of British Architects as “the grandest loos in Christendom”.

The College House dining hall, chapel and library are the three special spaces, or “crowns of the complex”, as Sir Miles describes them. The library and dining room bookend the quadrangle. They were designed with extra height to increase their bulk and have a form strong enough to compete with the sets of rooms. “They had to have sufficient substance to hold the space,” says Sir Miles.

A more recent alumnus of College House, Student Volunteer Army founder Sam Johnson says, “College House has a magical quality, thanks to the culture that the buildings, both old and new, facilitate. The chapel was my favourite place and I can’t wait to sit and play the piano there again one day.”

He’s not the only one who has a soft spot for the chapel. Sir Miles is often quoted as saying the chapel is his favourite building, not just of the complex, but of his significant portfolio (see ‘Miracle man”, Heritage New Zealand magazine, issue 140).

The chapel forms an imposing space that needed a distinctive architectural form – “a tour de force of timber,” as Sir Miles once described the building.

Sadly, it has been out of bounds since being damaged in Canterbury’s 2010-11 quakes. Alastair Drayton, Principal of College House, says a fundraising campaign is underway to raise money for the restoration and the College House Board is hopeful that it won’t be long before the chapel is once again the heart of life in the complex.

While the College House architecture is often described as Brutalism, it’s not a term Sir Miles warms to. “Look out there,” he says with a sweep of his arm that takes in the bright green of the quad lined with brilliant white boxes and punctured by the butterflied shape of the chapel. “Does that look brutal?”

It is a memorable space, not brutal as much as symmetrical, clean-cut and iconic. A look and feel that the College House Board feels brings a point of difference to its offering to students, both local and international.

Alastair says that students appreciate the building’s clever design. “Not only is every room a suntrap, but with only five rooms on each floor, by the time students leave, they have made friends they will have for a lifetime. Each house becomes a close unit where the students have their own mascot and traditions that carry on. We highlight the family feel and that everyone knows who their neighbours are.”

Christine Whybrew says the decision by Heritage New Zealand to include College House on the List acknowledges that the buildings are a significant work by Warren and Mahoney. “The fact that the complex has been adapted over time but the original design still maintains its integrity, means architects who have subsequently worked on the building – to add extra bedrooms and increase the size of the dining room post-quakes – really respect the architecture.”

Warren and Mahoney won the New Zealand Institute of Architects (NZIA) Gold Medal in 1969 for their work on College House, and then won the NZIA Enduring Award in 1999.

Maurice Mahoney says he and Sir Miles have always regarded the complex as one of their most important contributions to the modernist period of architecture in New Zealand, and especially enjoy hearing from students how inspirational they found their living quarters.

“We’ve come to realise how successful the project has been in fulfilling its intended purpose,” says Maurice. “That was the whole intention of the design – to provide accommodation with a special and inspiring ambience for its occupants that would lighten their days of study and lead to companionship and friendships. If the architecture has achieved that, what more could we ask?”